Experienced Legal Advice You Can Trust

Advising in all areas of employment law, including termination for cause, wrongful dismissal, constructive dismissal, severance pay, poisoned workplace environment, investigations, etc. We will fight for you. Representing individuals and employers.

Have you suffered a personal injury? Slip and fall? Auto accident? We can make the negligent party pay. We don’t get paid unless you do. If you got hurt then we can help. Get a lawyer that actually answers the phone when you call.

Have you been charged by RECO (Real Estate Council of Ontario) or under the Occupational Health and Safety Act?  Fines and consequences can be big, so you should get an experienced lawyer that will defend and fight for you.

Trucking, transportation and logistics have their own unique legal issues and terminology. In today’s world of intermodal and international delivery of goods, you need a lawyer that knows the applicable law. Representing both domestic and international carriers.

With all the condominium and construction developments going on in the Greater Toronto Area, neighbouring property owners are often approached by the developer who wants to enter into a tieback and crane swing agreement with them.

Aaron Crangle was called to the Ontario Bar in February 2000. Crangle began his law career at Teplitsky Colson, under the tutelage of litigation legend Martin Teplitsky, Q.C. Crangle has operated his own law practice for over 19 years and has been a repeat panelist in Ontario Bar Association seminars.

Crangle practices in all areas of litigation. Crangle Law is located in downtown Toronto, but clients are throughout Ontario.

Aaron Crangle has been a member of the Ontario Bar since 2000. He has been practising in all areas of corporate law and litigation. Extensive experience in employment law, civil litigation, personal injury, contract, collections, human rights, regulatory, tribunals, transportation law, labour, etc. Successfully argued in the Court of Appeal and all levels of Superior Court. Repeat panelist at the Ontario Bar Association.

Crangle is dedicated to providing clients with the highest caliber legal services, using the latest technology and techniques. Assisting clients with legal and practical solutions to achieve their desired results.

Legal matters can be intimidating and complicated, which is why it’s crucial to take an informed approach. You can count on us to guide you in every step of the process.

Flexible rates or a contingency agreement may be an option to avoid upfront legal fees. 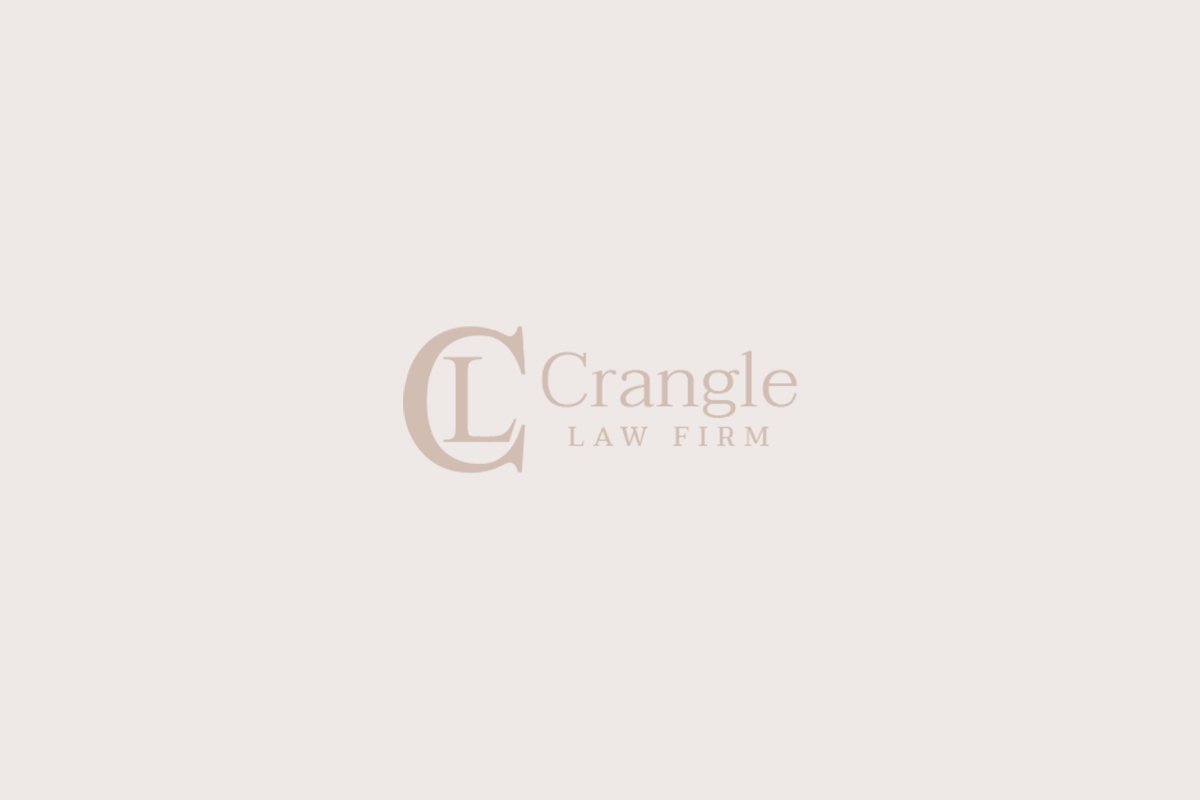 With all the condominium and construction developments going on in the Greater Toronto Area, neighbouring property owners are often approached by the developer who wants to enter
By Aaron Crangle
Read More
View All

1.
Can I get a free consultation?

Absolutely. Either call me or send an email summary of the legal problem, and I will respond.

2.
Do you take contingency cases?

Yes, if it is an appropriate case to do on contingency. To find that out, I will need to hear more about your case. Either call me or send an email summary of the legal situation, and I will respond.

3.
How much does a lawsuit cost?

Unfortunately, that is extremely difficult to answer. I know you hate that answer, but bear with me. The cost of a lawsuit depends on how much the other side fights. Some cases settle quickly, and a very small percentage of cases (only 5%) go all the way to trial. It can take at least two years or more for a case to go from beginning to the end. The legal fees are incurred as we go along, they are not usually all incurred upfront. Crangle may ask for an initial retainer. As that retainer gets depleted due to work performed, another retainer may be asked for, and so on. By far the most expensive part of the case is the trial. Since only 5% of cases go to trial, you should not really be concerning yourself about that initially. Crangle will advise you of the costs every step of the way so that there are no surprises, and he will do everything in his power to keep costs down to provide value.

4.
What are the steps in a lawsuit?

To provide a brief point form summary, below are the steps:

There may be other steps above, depending on the type of case it is. There could be motions which are brought to compel a party to do something prior to trial. The vast majority of cases never get to trial.

5.
How long does a lawsuit take?

A typical case will take at least two years or more to get all the way to trial. Sometimes it can take significantly longer. However, a case can settle at any time.

I am as aggressive as the case requires. A civil litigator sometimes has to take a very aggressive position on behalf of the client. That means putting forth the strongest possible arguments. If you are acting for the plaintiff, that means pushing the case forward as fast as possible, and holding the other lawyer to deadlines to keep the case moving forward. However, not all cases require or need a lawyer to be very aggressive. Some cases require more nuance. Since only 5% of cases actually go to trial, that means that the other 95% of cases settle. If you are not on speaking terms with the other lawyer because you have been so unreasonable, than it can undermine the ability to negotiate a settlement later. An experienced lawyer knows how to be aggressive and professional at the same time in order to achieve the best results for the client.

There are many facets that make up a great lawyer. It is not just about knowing the law. A lawyer must also think tactically. Further, the lawyer has to consider the client’s means. Representing a large company may require different tactics then representing a client with limited means. They do not have the same budget for legal fees. Crangle takes all of these things into consideration, and uses the latest techniques, technologies and strategies in order to get you the best result possible.

Crangle also puts a strong emphasis on communicating well with the client. This means explaining the legal process, informing you about what to expect in the short-term and long-term, and advising you of the strengths and weaknesses of your case. Crangle provides personal service. Clients have remarked that they like it when they call because Crangle always tries to make time to speak with them or return their calls promptly. Once retained, Crangle will draft a Statement of Claim or Statement of Defence for your review. Once we are both pleased with the final version, it will be filed at the court. Crangle will then keep you informed about what has to be done next so that we can move forward with a unified vision success.

8.
What percentage of cases actually go to trial?

It is estimated that only 5% of cases in the higher court actually go to trial. All of the rest either settle or get dismissed for some reason.

9.
What are the risks of going to trial?

There are several risks associated with going to trial. You do not know which judge you are going or get until a few days before trial or the actual date of trial. That means you prepare your case for whatever judge you get. Maybe the judge you get will see things differently than you do. There is always a risk that you lose as well. The loser usually has to pay portion of the winner’s legal fees. Since trials can be very expensive, that can be a real concern. A negotiated settlement at least gives you certainty. However, sometimes cases do not settle for whatever the reason is, and in those cases, you need an experienced trial lawyer.

In most situations, you can appeal a court decision that you do not agree with. However, you cannot usually appeal a finding of fact made by the trial judge. You can only appeal and error in law that the judge made. So if the judge applied the wrong law or did not apply the law correctly, you can appeal.

11.
How much severance am I entitled to?

In Ontario, the Employment Standards Act sets out the minimum amount of notice and severance that you should receive. Even if you did sign an employment contract, it may be unenforceable. If you did not sign an employment contract, or if the one you signed is unenforceable, then you will be entitled to notice under the “common law”. The common law means case law precedents that were decided in a court.

Under the common law, how much severance you are entitled to depends on a number of factors such as your age, your education level, your workplace experience, the availability of comparable alternative employment, among other things. People often think that they are entitled to one month of severance per year of their employment. For example, if you were employed for 9 years, you would receive 9 months severance. However, there is actually no “rule of thumb” with respect to severance. There is usually a range with respect to how much severance pay someone is entitled to. The range for an employee terminated after 9 years could be from 5 months on the lower end to 14 months severance on the higher end. A person that is 35 years old with an MBA and terrific reemployment prospects, would be in the lower range of severance. A person who is 64 years old with no postsecondary education, would be entitled to the higher end of the range. Further, if you were induced to leave previous employment to join the company you just got terminated from, then the court may add that to the period to be that is being considered for severance.

The maximum severance that a long-term employee is entitled to usually 24 months. There are some cases where more severance has been ordered. They are not common but it is possible in certain circumstances.

Although there is not an exact formula to determine your legal entitlement under the common law, Crangle can help maximize your entitlement. Flexible rates or a contingency agreement may be an option to avoid upfront legal fees.

12.
I am being offered a severance package, can I get more money?

Crangle can review the severance package and advise if you are entitled to more.

13.
Are Non-Competition clauses in an employment contract enforceable?

These clauses are often not enforceable because they are considered an unreasonable restraint upon trade, which means that they prevent a person from working and making a living. Courts do not like that. For one of these clauses to be enforceable it must be of very limited scope so that the departing employee can still make a living in the area in which they are trained.

These clauses may be enforceable if they are drafted properly. They have to be of very limited scope, such as not soliciting former clients that you dealt with, and only for a relatively brief duration, such as 12 months. The court will try to balance the reasonable interests of a company not to have all its clients solicited away by a departing employee, with the employee’s rights continue to work in the field in which they are trained.